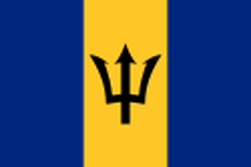 The National Flag was designed by Mr. Grantley Prescod, an outstanding secondary school master and Education Officer. The National Flag of Barbados is composed of three equal vertical panels -- the outer panels of ultramarine and the centre panel of gold. A broken trident in black is in the centre of the flag. The British standard colour code numbers for the colours of the flag are as follows -- Ultramarine (BCC 148), Gold (BS 0/002). The flag is designated in the proportion 3:2. The description of the flag -- Blue for the sea and sky of Barbados; Gold for the sand of its beaches. The symbol in the centre panel is the Trident of the Mythical sea god, Neptune. This symbol appears in the Seal of the colony which was replaced by the Barbados Coat of Arms. The shaft of the Trident is broken indicating Barbados' break with its historical and constitutional ties as a former colony.

On 14th February, 1966 the Coat of Arms of Barbados was presented by the Queen to the President of the Senate, Sir Grey Massiah. The Arms were designed by Mr. Neville Connell, for many years Curator of the Barbados Museum, with artistic assistance by Mrs. Hilda Ince. The Golden Shield of the Arms carries two Pride of Barbados flowers (the National Flower) and the Bearded Fig Tree (Ficus Citrifolia) which was common on the island at the time of its settlement. On either side of the shield are the supporters -- on the right (dexter) is a dolphin symbolic of the fishing industry and on the left (sinister) is a Pelican. The association is made with a small island named Pelican Island which existed off Barbados and which was incorporated into the Deep Water Harbour development. Above the shield is a helmet and mantling and on a wreath is the arm and hand of a Barbadian holding two crossed pieces of sugar cane symbolic of the sugar industry. This is a saltire cross, the cross upon which St. Andrew was crucified. Independence Day in Barbados is celebrated on November 30, St. Andrews Day.
The Coat of Arms carries the motto "Pride and Industry".

The National Flower of Barbados, known in Barbados since 1657, is the Pride of Barbados (Dwarf Poinciana or Flower Fence). It is a shrub and is often pruned into a low hedge. If untrimmed, it grows to a height of 10 to 15 feet. It is a member of the Legume family and can be found in other tropical countries.

The Pride of Barbados blooms most of the year. The more common varieties are a fiery red and yellow although other colour variations can be found. The flower has five petals with a yellow margin in a pyramidal inflorescence. Each flower is about 1.5 inches across with five sepals. The 10 stamens are long and the pistils project from the centre of the flower. The fifth petal is far smaller than the other four. The stamens have coloured filament with anthers at the tips however, the eleventh filament bears a stigma and is the style. The branches are prickly and the leaves are large and doubly compound about one foot long and six inches wide with many small leaflets.

The National Flower is accepted as the red variety with the Yellow Margin on the petals. It appears on the Coat of Arms.

I pledge allegiance to my country
Barbados and to my flag,
To uphold and defend their honour,
And by my living to do credit
to my nation wherever I go.